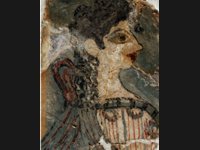 The famous Parisienne fresco
Fragment of a fresco with a female figure, possibly a young priestess, with the sacral knot at her back. The name was given by Sir Arthur Evans because of the concern for appearence indicated by her heavily made-up face. It was found at the west wing upper halls of the Palace at Knossos. Final Palace Period 1400 - 1350 BC. (Heraklion Museum)
Knossos
Archaeology
Minoan
Findings
Heraklion Museum
Fresco
Piano Nobile
Parisienne
Archaeological Museum of Herakleion
Knossos
The Piano Nobile 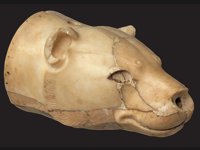 Knossos - The Lioness' head Vase
Rhyton in the form of a lioness's head of off-white translucent limestone, a work of exceptional plasticity rendered naturalistically. The inlays in the snout and eyes, possibly of jasper and crystal, like those on the bull's head rhyton (found also in Knossos) have not been preserved. From the west wing Upper Halls of Knossos Palace. Neopalatial Period 1600- 1500 BC - Heraklion Museum.
Knossos
Archaeology
Minoan
Findings
Heraklion Museum
Rhyton
Piano Nobile
Archaeological Museum of Herakleion
Knossos
The Piano Nobile 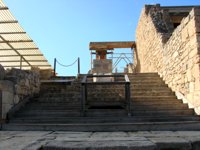 Knossos - The great staircase
The staircase that leads to the west wing upper halls - Piano Nobile - from the central court of the palace at Knossos.
Knossos
Archaeology
Minoan
Archaeological Sites
Piano Nobile
Knossos
The Piano Nobile 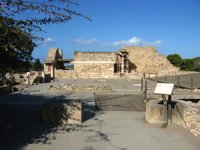 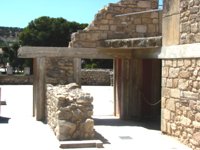 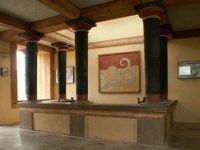